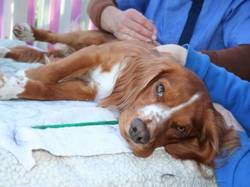 ​Be under no illusion, massage is by no means a ‘new-fangled’ therapy for restorative well-being. Massage has its roots steeped in ancient times as depicted in European cave paintings from circa 15,000 BC and from the writings of Chinese massage practice - 3,000 BC.

It is a non-invasive therapy which consists of the manipulation of the superficial and deeper layers of muscle and connective tissues of the body with the hands. In humans, massage (‘friction of kneading’) is an incredibly self-instinctive method of relieving painful and tired joints by giving yourself ‘a knead’ (or as the Chinese referred to it as an ‘Ammo amma’ - a press-rub) as a means to reduce soreness and ease inflammation. This in turn creates a feeling of well-being, promoting relaxation, thus aiding in the process of repair. Massage is used to improve circulation, reduce oedema where present, prevent adhesions in tissues after injury, reduce muscular spasm, and improve the tone of muscles. Being a ‘hands-on, touch therapy’ massage inspires spiritual awakening, tapping into the physiological need for man and beast alike to touch and to be touched. The skin covers a great area of body mass and is loaded with sensory receptors, all of which respond instinctively to touch, temperature, texture and tenderness - be it a caress (pleasurable), a slap or a nip (brings blood to the surface and stings), an injury such as a crush or a burn - (particularly painful if it’s to the fingertips as their nerve endings are directly linked to the brain), stroking a canine (pleasurable, also instinctive for many of us), tickling (irritating), itch-scratch-itch cycle (irritation - relief - inflammation) - it is all felt via the nerve endings, with some touching sensations obviously more enjoyable than others!

The art of massage therapy requires the initiation of comfort to warm and relax the muscles, reducing tension, thus easing the mind and body, allowing for greater manipulation of any restricted muscles and connective tissues in order for the brain to inform the body to release pain-relieving endorphins, hormones and neurotransmitters and thus easing, calming and helping the patient.

Massage, therefore can be considered as a natural, holistic therapy working not only on the body, but on an emotional and spiritual plane as well, with the benefits far outweighing disease-specific allopathic treatments/remedies.

Palpation
In the modern world of technology with what seems to be 'everything' at hand with touchscreen and fingertips, it comes as no surprise that massage has stood the test of time. The very nature of palpation, defined as ‘the process of examining part of the body by careful feeling with the hands and fingertips, it is possible to distinguish between swellings that are solid and those that are cystic’. The Art of Palpation is intrinsically linked with what the fingertips are feeling. The fingertips are equipped with a myriad of sensory nerve endings directly hooked up to the brain. By harnessing this sensory perception effectively it can be used as an extension to the optical part of the brain. Thus, the fingertips are subsequently considered to be the ‘eyes’ in the art of palpation. By developing and fine tuning palpation skills, the job of the Canine Massage Therapist will be made a little easier as the canine-patient will undoubtedly not have procured ‘His Master’s Voice’, (although with the way in which technology is developing, I am sure there will be some ‘super-power scientist’ out there waiting to ‘enhance’ our dogs’ lives with the power of dialogue), and is unable to communicate verbally as to the depth and location of pain. This is where palpation skills come into their own, as highly developed fingertips will be able to detect tension and/or changes in the texture of the soft tissue, which could be caused by just a few fibres within the muscle bundle, but the affected area is extensive and the damage remains undetected by ultrasound or x-ray.

Did You Know?
In days of olde (ca. 1880) the art of massage in Japan was practiced almost exclusively by blind persons as a means of income, and this employment was sanctioned and supported by the government.